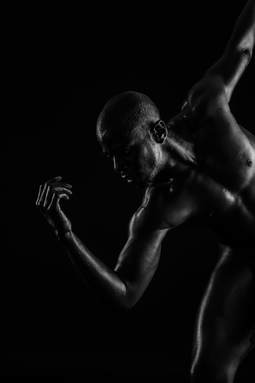 A native of Queens New York, Serge began his training at the age of fifteen. It was a rather late beginning but he had the potential that landed him a spot at the prestigious Fiorello La Guardia H.S. of Music, Art and the Performing Arts. During his high school days he earned a scholarship at the Alvin Ailey School, Studio Maestro, Dance Theater of Harlem, and American Ballet Theater. He was later accepted at SUNY Purchase where received a Bachelor of Fine Arts in Dance. While at Purchase he performed with American Repertory Ballet and Thomas/ OrtIz Dance. He accredits his growth to having had the experience to work with choreographers/ teachers Nathan Trice, Laurie Stallings, Helen Pickett, Penny Frank, and Leslie Wiesner.

In August 2008, Serge was invited to participate in the Production of Don Juan. He then began performing overseas in Bremerhaven, Germany. Under the leadership of Sergei Vanaev he would growth and perform with Stadttheater Bremerhaven for one year. In 2009 he was offered a contract to dance with the Tiroler LandesTheater in Innsbruck, Austria. Under the leadership of Enrique Valga Gasa, while residing there for two years Serge had the opportunity to dance many lead roles, act, and choreograph. In 2011 he joined Opera Graz in Austria under the leadership of Darrel Toulon. In 2012 he was invited by the Latvijas Nacional Opera in Latvia, Riga to be a guest solo artist for their production of Othello. With the experiences and encounters he has had in this huge dance arena called Europe, he is thankful to have had the opportunity to have worked with Sergei Vanaev, Enrique Valga Gasa, Kinsun Chan, Luches Huddleston, Jochen Heckman, Yuki Mori, James Wilton, Vasco Wellenkamp, Dong Jie, Richarda Regina ludigkeit, Rosana Hribar, Gregor Lustek, and Alla Sigalova. From 2014-2017 he would go onto perform with the world renowned musical the Lion King Muscial in Hamburg, Germany ( Der König Der Löwen) under Stage Entertainment. Currently living in France as a certified Pilates instructor, floor-barre instructor, a licensed massage therapist, and at times teaching jazz / contemporary workshops.